We were honored to meet with Ohio Medicaid Director Maureen Corcoran on Friday, April 19, 2019.

Our discussion focused on:

We also suggested that the state of Ohio could create a review panel of medical professionals, including trauma-informed child psychiatrists, to address questions and concerns regarding foster care children and teens and whether the treatment and medications they are prescribed are clinically appropriate. Quotes from youth evaluations of the OHIO YAB workshop: 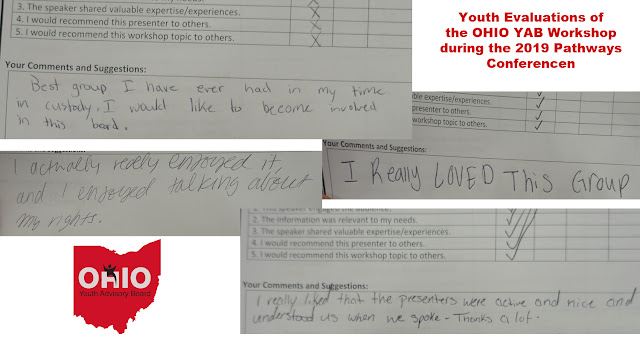 Jamole Callahan is turning 40 this year. He’s carved out a successful career in advocacy and motivational speaking (his Twitter handle is @MrMotivator). But in college, as a youth who had aged out of foster care, his path was far from stable.
My issue after aging out was there was just nowhere for me to go when school went on break,” Callahan said in an interview with The Chronicle of Social Change.
During those college breaks in Ohio, he stayed with classmates, or sometimes with a friend of his high school science teacher. But many teens lack such options.
“We see kids attempt postsecondary and fail just because they don’t have housing,” Callahan said. “They have to work to maintain an apartment, then school becomes the background. And it becomes all about survival.”
There are some competing ideas about how best to legislate new federal support for housing to help youth after they exit foster care. But a group of housing advocates and former foster youths recently met with top federal housing officials to make the case that there’s no need to wait for Congress.
A group called the Fostering Stable Housing Opportunities (FSHO) Coalition — which includes Callahan’s youth-led ACTION Ohio and the National Center for Housing and Child Welfare — met in early March with Housing and Urban Development (HUD) Secretary Ben Carson to lay out a plan for a $20 million voucher program aimed at preventing homelessness for transition age foster youth. Under that plan, HUD would use an existing pot of money to provide on-demand vouchers and assistance for foster youth who needed stable housing.”
HUD is currently reviewing the proposal to determine the agency’s authority to act on it. If the plan moves forward, it could be a game changer for thousands of teens and young adults who age out of foster care each year.
The stakes couldn’t be higher. After decades of reforms aimed at preventing youth from becoming adults in foster care, or ending up on the street when it happens, the number of youth who age out of the system has stubbornly ranged from 20,000 to 25,000 per year.
And research shows that the percentage of foster youth who end up experiencing homelessness is still outrageously high — 28 percent experience homelessness by age 21, according to the National Youth in Transition Database. In some states, it’s above 40 percent.
“They are doing something that could mean a seismic shift in housing and child welfare policy,” said Ruth Anne White, executive director of the National Center for Housing and Child Welfare.
Following is a breakdown of how the plan would work.

Through its Tenant Protection Fund, HUD is given money to provide Tenant Protection Vouchers. In general, these vouchers are designed to provide rent support to people when changing circumstances threaten to leave them homeless. Surely, one such circumstance would be a person aging out of foster care at age 18 or older, with no affordable housing option on the horizon.
There are several different types of Tenant Protection Vouchers that target different populations. One is called the Family Unification Program (FUP) voucher, which can be used for two child welfare-related groups:
Alongside the FUP voucher is the Family Self-Sufficiency (FSS) program, which provides assistance aimed at helping public housing residents increase their earned income and decrease reliance on the social safety net. This support includes job training, child care, transportation subsidies and financial literacy classes.
The FUP voucher lasts for three years. But continued FSS participation allows a FUP voucher recipient to receive an additional two years of support, so pairing the two could mean post-foster care housing support can last for up to five years.
Under the plan pitched to HUD by the advocates, a child welfare agency would file FUP paperwork in the year leading up a youth’s emancipation from foster care – whether that occurred at age 18, 21 or some point in between. HUD would issue the FUP voucher, and the local public housing authority would administer both the voucher and the FSS services.
It is worth noting here that currently, most public housing authorities do not offer FUP vouchers. More on that later, because the coalition’s plan would negate that barrier.

So that’s the structure that can be used to support youths aging out of foster care. But is there money available to fund the vouchers and the employment-related services? Apparently yes — the advocates who met with Carson argue that there’s a fund at HUD that can be tapped to jumpstart this.
FUP has had an up-and-down ride when it comes to funding, White said. It has been an allowable version of the Tenant Protection Vouchers since 1990, and there was a regular carve-out for it until about 2002, after which it faded out of the annual appropriations process.
A line item for FUP resurfaced in fiscal 2008, written into appropriations that year by Sen. Patty Murray (D-Wash.) and former Sen. Kit Bond (R-Kansas). The two wrote in instructions for HUD to spend $20 million on FUP. More recent allocations for FUP have ranged from $10 million in 2017 to $20 million in 2018.
But the coalition told HUD officials that there is a bigger bank of unspent HUD funds that could be used to create a dedicated FUP youth program. The congressional justifications for President Trump’s 2019 budget noted $133.2 million in carryover funds in the area of “rental assistance.”
Nearly all of that money is from the Tenant Protection Fund, where FUP lives. It is held in reserve at the moment for housing complexes affected by demolition or expiring affordable housing contracts, and to help situate some people in the federal witness protection program. The FSHO Coalition asked for $20 million out of this contingency fund to be dedicated for FUP youth. The most critical piece of the advocates’ plan is a change in the way that FUP vouchers are made available to youth.
Currently, FUP’s youth vouchers are awarded in blocks through a competitive process where public housing agencies are the applicants. This, White said, is an inefficient way to get at a finite group of youth who are flung throughout the country. There are thousands of housing authorities, and only the winners would receive vouchers.
In a place where the demand by foster youths is low, or a housing agency is bad at connecting with child welfare agencies, those vouchers might sit idle. And elsewhere, foster youths who might badly need the help wouldn’t get vouchers because they were awarded to the nearby agency.
Other HUD voucher programs are processed on-demand, meaning that a single family or person applies and is considered for an available slot. This centralizes the approval process to HUD, removing the local housing authorities and their individual store of vouchers from the equation.
“Converting to an on-demand process is key,” White said, “because youth continue to be in purgatory for pilot projects. We appreciate all the efforts to build housing around the country for youth – but 40 new units in Cincinnati won’t help the youth in Athens. This complements those efforts.”
The result is that most areas of the country end up with no FUP vouchers, and among the public housing authorities that do offer them, most of the action goes to families, and not foster youth. A 2014 study found that just 91 of the 195 FUP programs served foster youth, and among those 91 programs, only a third of the FUP vouchers went to foster youths.
“The most common reason [public housing authorities] cited for not serving any youth was a lack of referrals,” said the study. “The lack of youth referrals likely did not arise from lack of demand.”
Converting FUP’s foster youth vouchers to an on-demand process would solve that, and allow child welfare agencies to deal directly with HUD in preparing for these teens to age out of foster care and into stable housing for up to five years. And when a particular youth had completed the FUP-FSS program, that voucher would recycle back to HUD to be used for the next youth.

The FSHO Coalition sat down with HUD Secretary Carson on March 4 to lay out what they believed to be an actionable plan that the agency could start setting up without any help from Congress.
Carson was engaged in his meeting on the plan, said Callahan of ACTION Ohio. “He gets it, he does. He was very intrigued about the info we had, and had questions about where the data came from.”
That was hardly the first or last meeting with HUD the coalition has had. Callahan said they have been lobbying HUD and Congress for seven years, and have developed allies there. Danielle Bastarache, HUD’s deputy assistant secretary for policy programs, has “become a champion for this,” Callahan said.
White, of the National Center for Housing and Child Welfare, said that HUD officials have been supportive of the plan. The agency sent officials with her to a meeting this month at the Department of Health and Human Services, the agency that oversees child welfare policy and funding.
“So they hoofed it over when we had the strategy meeting about it,” White said. “I feel like they wouldn’t have done that if they didn’t want to move forward.”
HUD officials declined to comment for this story, but a spokesman for the agency said the proposal is being reviewed by its Office of General Counsel and Chief Financial Officer.
There is also the matter of legislation to permanently embed this plan into law. The coalition that met with HUD had originally conceived of this plan in a 2018 bill – called the Fostering Stable Housing Opportunities (FSHO) Act, which would guarantee a housing voucher starting from emancipation through age 25 for any youth aging out of foster care who could demonstrate the need for a subsidy.
The bill — sponsored in the House by Reps. Mike Turner (R-Ohio) and Karen Bass (D-Calif.), and in the Senate by several members of the Senate Caucus on Foster Youth — ran up against some opposition in the previous Congress because it included a work requirement. That requirement has since been removed, and White said that the group has also garnered the support of House Financial Services Committee Chairwoman Maxine Waters (D-Calif.).
If HUD moves forward on its own authority, passing the FSHO Act mostly becomes an exercise in codifying this plan. It would establish the foster youth voucher as a distinct program within FUP that is to be carried out using an on-demand process.
“If Carson signed a memorandum today, that could go out today,” said Callahan. “But at the turn of a new administration, that could go away.”
An online petition circulated to support the FSHO bill has more than 54,000 signatures.
If it all comes together, the plan could ensure a key stabilizing factor for one of the most likely groups in the nation to end up on the streets.
“The child welfare system knows when a kid will be terminated,” Callahan said. “Now we can make sure there’s a voucher anywhere in the country for them to provide assistance.”
Posted by Lisa at 6:36 AM No comments: 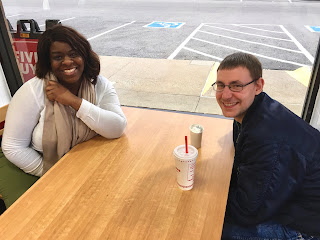 We of ACTION Ohio are deeply proud of Michael Outrich, and excited about this next new chapter in his life.

Link to photos of our celebration of Michael's accomplishments.