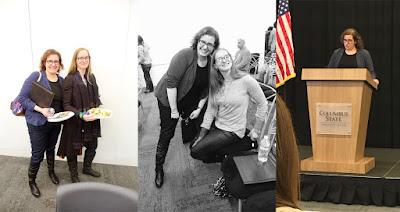 My name is Nikki Chinn, and I am former foster youth that aged out of Franklin County in 2008.  I am one of the founding board members of ACTION Ohio, a member of the Columbus State Scholar Network, and the Youth Constituent Liaison on the Board of Directors for My Very Own Blanket.

I want to first thank the Children Services Transformation Advisory Council for hosting these forums and asking former foster youth to take part. I also want to thank Governor Mike DeWine who has been an incredible ally to those of in and from foster care.

One of most pertinent issues that I would like address tonight is the need for a non-biased foster care ombudsman for our youth in the state of Ohio.  Youth are taken out of their biological homes through no fault of their own, are put in placements that are supposed to be safe and free from abuse and neglect, but unfortunately not all placements are free from abuse and neglect.  Abuse in foster homes has only increased with privatization of the foster care system.

At the age of fourteen, I was placed in a residential center where I witnessed staff members assaulting youth in more ways than one.  This particular placement also used food as a punishment.  If a youth were to act out, many times they would not be permitted to eat the next meal, and if they were it was not the same food that everyone else got to eat.

At the age of sixteen, I spent time in a foster home that had five of us foster youth living in one bedroom.  We had a bunk bed and a single twin mattress on the floor.  The five of us would take turns each night on who got to sleep on a bed/mattress and who slept on the bare floor.  We were not allowed to leave to the bedroom without permission, which included going to the bathroom.  We had no dresser, or closet in our room.  We were not allowed to be with the members of the biological family and were not allowed to talk to our foster mother’s biological daughter.  The foster mother kept pad locks on all the cabinets and on the fridge so we could not get food when we were hungry.  When we did eat, we were cooked ramen noodles while the foster family had actual meals.

In both of these situations, myself and the other youth reported the issues to our case workers, however the problems persisted.  In the residential center it was a very rare occasion when a youth would be permitted their legal right to contact the residential coordinator or make a grievance, and when were allowed to, the coordinator worked for the same company, so our concerns either got swept under the rug or we were told that we making the accusations up.  In the foster home, the foster mother would create elaborate lies about what horrid children we were and how bad our behavior was, so we would get reprimanded from the case workers rather than the foster mother.  Had a Foster Care Ombudsman been available to me at the time, myself and the other youth could have gotten into safer placements much sooner than we did.

It has come to our attention that Ohio foster parents are requesting that the needed Ombudsman be available to them too. While I care what foster care and kinship care parents go through, this would be counter-productive and a conflict of interest.  I also have great concerns about the Foster Care Ombudsman being under the Ohio Department of Job and Family Services.  If the Ombudsman were being paid by the same organization that funds, the Foster Care System it would be impossible for the Ombudsman to be impartial.  Therefore, as former foster youth we had hoped that the Ombudsman would under the Ohio Attorney General’s office.

I appreciate you taking the time to listen myself and my brothers and sisters of the foster care system.