The OHIO YAB, ACTION Ohio and the Children's Defense Fund~Ohio held a successful meeting with Representatives Susan Manchester and Phil Plummer on December 1, 2021 and are delighted to share that they have agreed to amend House Bill 4 to include the three revisions requested by Ohio foster care youth. Please see page 27-28 of Amendment #134-2057-02.We are committed to support House Bill 4 as it makes its way through the Ohio Senate if these three changes are included. We look forward to partnering with ODJFS and the Office of the Governor during the implementation phase.

Ohio Legal Help is a two-year old non-profit organization that was established through a joint effort of the Ohio Access to Justice Foundation, the Ohio Supreme Court, Ohio’s legal aids, and other stakeholders in Ohio’s legal system.

They want to add a special section on their website to support the legal needs of current and former foster youth.

Below are the Top 14 Legal Needs that have been identified so far. They have also Ohio foster youth and alumni who are interested to become beta user testers and provide their feedback in the future. 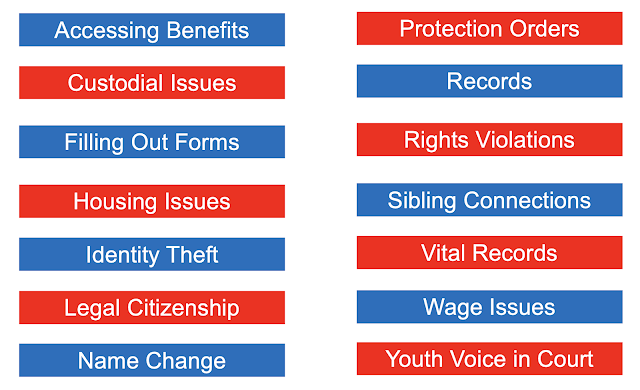 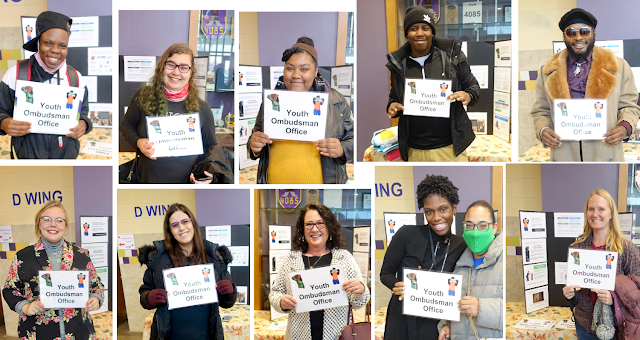 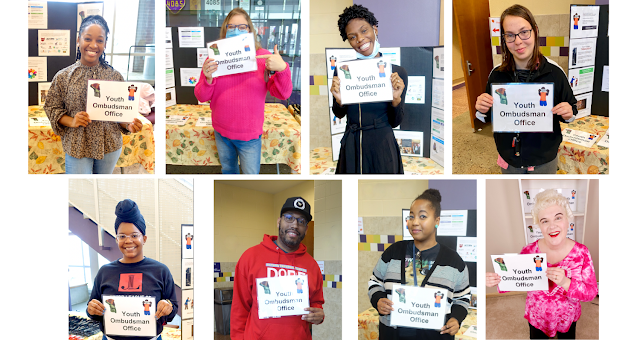 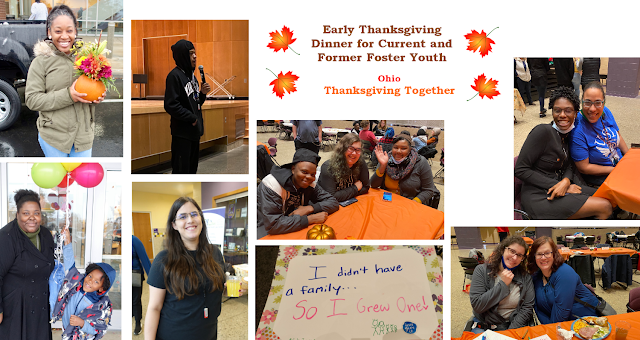 Those of us who have experienced foster care firsthand know that the holidays can be a painful reminder of lost connections. That’s why ACTION Ohio works with our allies each year to host early Thanksgiving dinners for foster care teens (ages 14+) and alumni (ages 18+).

This annual celebration began in 2007, and has continued ever since. As former foster youth ourselves, we want our brothers and sisters of the system to know that they always have a seat at the table for Thanksgiving.

Due to ongoing complications related to COVID, we were only able to host one statewide Thanksgiving Together event this year. The event took place on Sunday, November 14, 2021 in Columbus.

One of the most powerful moments during the event was when a young man who is currently homeless gave a speech praising Star House. He invited staff members to stand and be recognized. He then asked participants to raise their hands if they are currently or have ever been homeless. The plethora of hands raised throughout the room underscored the urgency of supports to support foster youth in their transition into young adulthood. 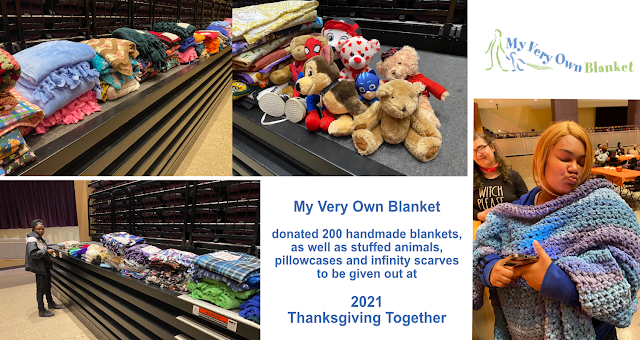 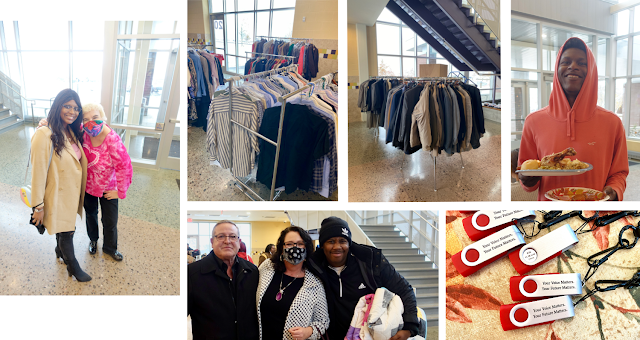 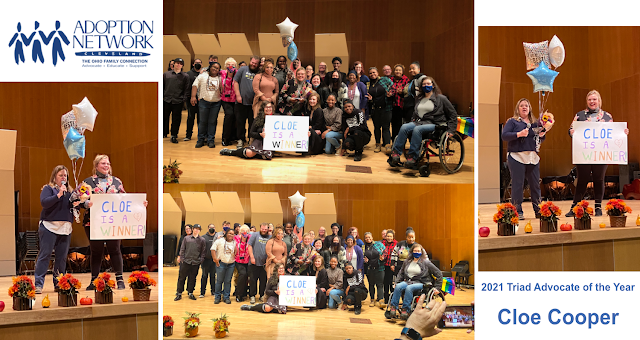 Cloe Cooper was recently honored by receiving the 2021 Triad Advocate of the Year Award from Adoption Network Cleveland.

Significant contributions by Cloe and how they have made a difference for others include, but are not limited to:

1.) Serving as a Scholar Coordinator for the CSCC Scholar Network. This program exists to support current and former foster youth who are currently enrolled at Columbus State Community College by providing ongoing mentorship, peer support, and leadership experiences.

2.) Founding and directing the Fostering Achievement Network (FAN), which serves as a campus support network for former foster youth who are currently attending The Ohio State University.

3.) Serving as a Peer Mentor through Ohio Reach, a network of professionals, advocates, and students across the state of Ohio who are determined to support former foster youth on their higher education journey.

5.)  Serving as an appointed member of the Ohio Supreme Court Subcommittee Responding to Child Abuse, Neglect and Dependency, and advocating for trauma-informed changes in the court system in response to the voices of those with lived experience.

6.) Partnering with Jaye Turner of El'lesun to facilitate Project PASSION, which empowers and supports young adults in or from the child welfare system and provides them with no-cost professional attire as they enter and maintain jobs in the workforce.

The focus was on sharing the national report on Sequel facilities, and concerning patterns including seclusion, restraint, and failure of the grievance process.

1. Transparency in the licensing process, with opportunities for public comment. Could ODMHAS publish the status of Sequel’s license, and of all facility licenses?   Is there a way for youth/families to know if facilities are in good standing, or incidents (restraints, complaints, licensing actions, etc)?

3. Ensure Sequel can’t operate and continue to harm young people in Ohio. Sequel has a track record in Ohio and nationwide.  What safeguards exist to prohibit them from being relicensed?  How does OMHAS take the history of residential facilities into consideration with their licensure? 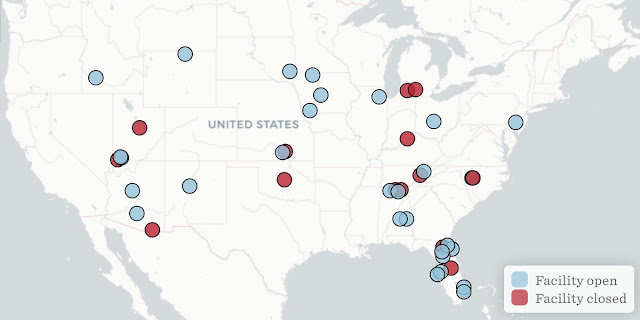 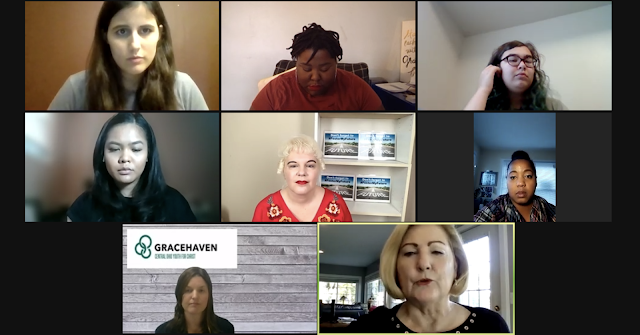 Published October 22, 2021 at 3:20 PM EDTAdvocates for foster children on Zoom, talking about the bill

Two Democratic Ohio lawmakers are sponsoring what’s being called the “Foster Youth Bill of Rights” that they say will give at least 15,000 children in the state’s custody more knowledge about their options and give them more of a voice in their care. Statehouse correspondent Jo Ingles reports the bill is similar to laws passed in 20 other states.

Sen. Tina Maharath (D-Canal Winchester) was herself in foster care as kid. She says children in the system need this legislation.

“The rights established in this bill would help keep foster youth safe, healthy and cared for while in the foster youth system. It’s also going to help educate foster youth of their rights,” Maharath says.

There are 31 rights listed in the bill, from being free from abuse to having privacy to living in a clean and safe environment. Maharath and fellow Democratic Senator Teresa Fedor (D-Toledo) say they’ve worked with former foster care children and their advocates when coming up with this legislation.