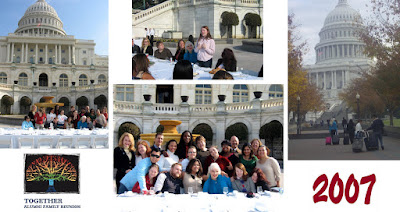 Amanda's toast at the Thanksgiving table mirrored her message to Ohio Congressman Patrick Tiberi:
"I grew up in foster care in the 12th district of Ohio.

"I was separated from my older and younger brother in care. I was fortunate enough to stay with my older sister.

"In care, I felt as though I had no connections and no voice. My very own guardian ad litem didn't listen to my wants and needs.

"FCAA has given me two things: a family and a voice. I am now the Youth Outreach Coordinator for the Ohio chapter and I am very passionate about child welfare. FCAA has given me lifelong connections, and the chance to make a positive difference!"
Posted by Lisa at 7:13 PM No comments:

Who will protect our children? 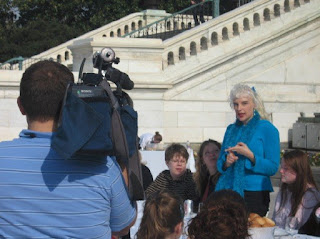 Each us shared our thoughts at the Thanksgiving table at the United States Capitol, as part of Foster Care Alumni of America's nonviolent protest to reform the foster care system.
Here is what I said:
"I am a parent now, and I know what parents are supposed to do: PROVIDE, PROTECT and PREPARE our children for adulthood.

"Neither my father nor the government fulfilled those roles for me. As a child, I was not provided for in terms of my physical and emotional needs. I was not protected from physical and sexual assault. I was not prepared for the adult world.
"Sometimes when parents can't do the job, older siblings step up to help. So, if the government won't provide, protect and prepare young people within the foster care system, who will?"
Everyone at the table, all of whom had grown up in foster care, answered, "WE WILL!"
Posted by Lisa at 7:49 AM No comments: 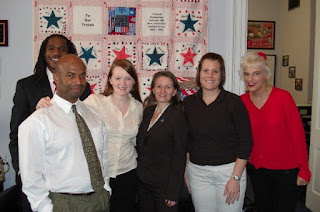 Congressman Patrick J. Tiberi was our last Ohio visit of the day. His actions demonstrate that he is aware of the urgency of foster care.

Amanda Dunlap took the lead in this conversation. She lives in the 12th district and has had firsthand experience with foster care and adoption.

Lisa Dickson shared the entire roster of bills, including the de-linking bill, kinship care, the adoption equality act, the Boxer and Clinton bills, because we want Tiberi to sponsor them all.

Legislative assistant, Lindsay S Vogtsberger (white pants, second from right) won't be our long-term contact regarding this initiative. We will continue to search for the right contact. 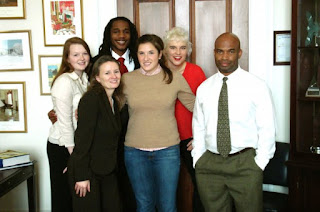 Congresswoman Deborah Pryce is reported to care about adoption.

The person that we met with was Caitlin Short (tan sweater, middle of photo), and her focus is on the environment.

Legal assistant Lauren Neff will make a better contact for us... 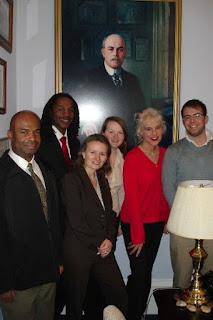 Ohio Congresswoman Jean Schmidt's parents provided kinship care for another member of her family while she was growing up.

Therefore, while talking with her legal assistant Ben LaRocco (on the far right), our focus was on the Kinship Caregiver Support Act.

Steven(far left) shared his personal story; after he aged out of care, his aunt told him that she had wanted to take him and his siblings so that they could stay together - but she couldn't afford to do so.

Then Kevin (second from the left) suggested that, in situations where family members are the best placement, they should receive financial support.

Ben might not work directly on this issue, so he asked us to email him all the facts so that he can get them to the right person...
2nd district OH
238 Cannon Building
Washington DC 20515
ben.larocco@mail.house.gov
Posted by Lisa at 7:11 PM No comments: 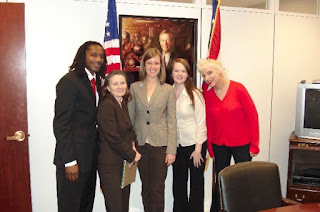 We focused on the cost-effectiveness of investing in young people aging out of foster care, while talking with his legal assistant Angela Mikolajewski (gray suit, brown pants in picture on the left).

1. Kevin Brown shared his personal story and it was obvious how ETV funds were a wise investment for his future. It pays to invest in young people aging out of foster care.

4. Amanda Dunlap went over the packet of information about the Kids Are Waiting campaign in great detail.

It should be mentioned that Angela Mikolajewski is an amazingly good listener. She is, without a doubt, the best listener that I have ever met in my life.
Posted by Lisa at 7:01 PM No comments: 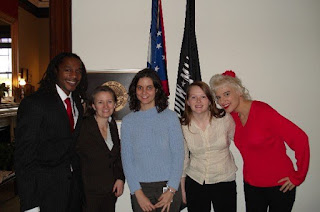 During Foster Care Alumni of America's recent visit to Washington DC, the Ohio chapter's first visit was to the office of Ohio Senator Sherrod Brown.

We met with his legal assistant Caroline Wells (pictured in light blue shirt in center.)

This bill allows states to receive federal reimbursement for all children in foster care, regardless of their biological parents' income, and also rewards states for preserving families by allowing them to reinvest funds.

1. Kevin Brown took the leadership role in initiating the discussion.
2. Lisa Dickson shared her personal story about how her father's middle class income did not help her during the time that she was in foster care.
3. Amanda Dunlap introduced the solution and gave the packet of information
4. We made sure to mention the Ohio statewide youth advisory board's recommendation to support the Boxer bill and raise the age to 23
5. Since Senator Brown is a Cleveland native, we also shared the current successes and initiatives of the Cuyahoga Youth Council, including their upcoming "Orientation to Emancipation."
Posted by Lisa at 6:50 PM No comments: 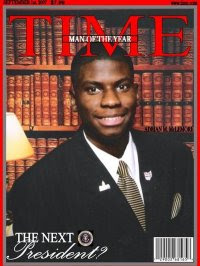 "My name is Adrian M. McLemore. I'm currently a student/leader at THE Wright State University. I am studying Business Administration and Political Science. I am interested in leadership and government, and have been since the 8th grade.

"I would like to become a President/CEO of a fortune 500 company/corporation. I would also like to venture into politics and become President of the United States."


To the future FIRST LADY, this is who I am working on being for YOU :

A REAL MAN
* Can make you smile, even when you don't want to!
* Will bring you around his friends!
* Isn't afraid to tell his friends he loves you!
Posted by Lisa at 6:07 AM No comments:

Building a Circle of Restorative Relationships 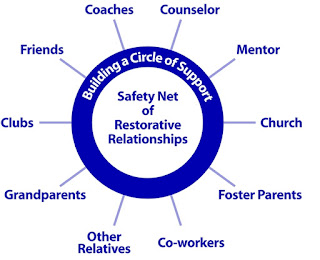 This diagram was created by foster care alumna Lisa Dickson. It has been used in training youth, foster parents and child welfare professionals.

If anyone reading this blog were to suddenly move to a new state, they would need to develop a new circle of relationships for themselves.

Foster care youth frequently move from one place to another... Regardless of their ultimate placement, it is vital for them to develop the skills to surround themselves with trustworthy, helpful people.

Child welfare policies need to support -- rather than hindering -- this process. 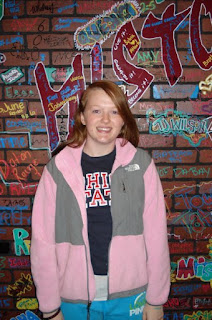 This year, Amanda helped to present a series of workshops at the statewide foster care conference, which took place in Columbus Ohio, June 14-16.

Amanda also co-presented a workshop on PTSD and emotional trauma at the fifth annual Casey Foundation It’s My Life conference, which was held in Atlanta, GA from Sept, 30 – Oct. 2, 2007.

On a personal note, Amanda was recently contacted by her biological father, and informed that heart problems are a part of her family history.

To be healthy, now and later on in life.
To find a supportive circle of relationships and maintain them.
To love myself and others as they should be loved.
To do well in college and become the best social worker I can be.
To support Foster Care Alumni of America in all that I do.
To reach out to young people in the foster care system and make a difference in their lives.
Posted by Lisa at 12:16 PM No comments:

Billy and I knew each other first at a children's home, where we both lived for several years.

Later, we met up again after graduate school and attended a group home reunion event together.

The crickets were chirping, but that was it. There was no one else there from our generation. It was a lonely reunion, and left us feeling disconnected and rootless.

However, our interpersonal connection was powerful because we both knew what it was like to be in and age out of foster care.

We had both developed and were in the process of implementing the goals we wanted to achieve in our lives.

Here is his plan:

To learn how to love and be loved. To invest time and energy into long-lasting relationships. To diminish my competitive nature of scarcity and think in terms of abundance. To enjoy the company of others and to grow from their experiences.

To live within my means, not losing sight of other areas in my life. To live my life in balance: health, happiness, relationships, mind. To live a life of integrity, humility, honesty and justice. To focus on long-term satisfaction instead of instant gratification.

To always learn more about my life, my friends and my world. To never tire of learning something about everything. To learn how to improve all areas of my life. To assist and teach others of my discoveries. To live a life that inspires and motivates those I touch.

To hold true to my idealistic view and make it reality. To teach my future children the principles of happiness. To leave this world knowing that I have made something better.
Posted by Lisa at 8:18 AM No comments: 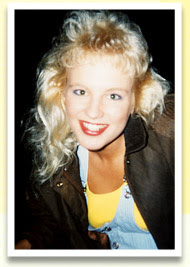 Lisa Dickson: After I aged out of foster care, I entered college at age 16 years old.

Only one other person that I knew from foster care went to college. When he and I met up again in graduate school, we discovered that we had more than our past history in common.

He and I had both created mission statements for our lives. No one told us to, we just found ourselves mapping out a plan for our lives.

Although we were not in touch with one another at the time that we wrote them, our mission statements had much in common...

To know more and to experience God, others and the truth.
To love, and to be loved.
To give, and to be given.
To teach, and to be taught.
To abandon security for salvation.

To open my arms and widen my heart.
To enlarge the scope of my perceptions.
To love God, and to rest in him.
To be his. That’s my goal.
Posted by Lisa at 8:09 AM No comments:

The Power of Shared Experiences

What do foster care alumni over the age of 23 have to offer young people who are in, or who have recently emancipated from the foster care system?

Consider this analogy: A man is walking down the street and he falls into a deep hole.

A priest walks by and he yells up for help. The priest offers to say a prayer for the guy in the hole and walks away. An executive walks by and throws a dollar down the hole. A doctor walks by and drops a prescription in the hold.

Finally, a friend walks by and jumps into the hole with his friend.

The first man, in shock, asks, "What did you do that for, Are you nuts?!?! Now we're both stuck down here!"

The friend replies "Yes, but I've been down here before and I know the way out."
Posted by Lisa at 8:00 AM No comments:

Walking a Tightrope Without A Net 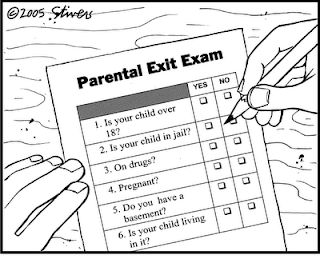 Most young adults in the general population rely upon their families for assistance with a place to live, financial support and other guidance as they transition to adulthood.

Half of young adults ages 18-24 in the general population in the United States live at home with their parents, according Children's Rights.

Yet young people aging out of the foster care are expected to transition successfully to the adult world.
Posted by Lisa at 7:51 AM No comments: