Appreciating our Allies: Buckeyes for Adoption and Foster Care 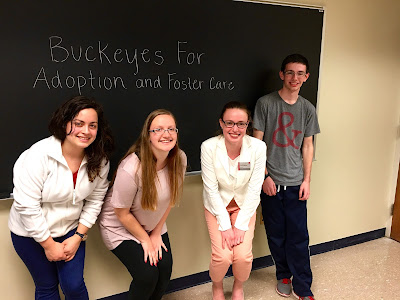 ACTION Ohio loves partnering with Buckeyes for Adoption and Foster Care, an OSU student group that exists to promote awareness and to educate Ohio State students about adoption and foster care, aiding the community through volunteer work and fundraising.

My favorite part of attending one of their recent meetings was hearing what drew them to become involved in Buckeyes for Adoption and Foster Care.

We truly are lucky to have Jessica Roller as a student leader and a voice for adoption and foster care on OSU campus.

Thursday was a day to relax and celebrate the many accomplishments that youth had made during their fourth annual trip to DC.

ACTION Ohio (Alumni of Care Together Improving Outcomes Now) was honored to sponsor and facilitate this week’s adventure.
Posted by Lisa at 5:38 AM No comments:

Legislative Visits on Wednesday were followed up by a Celebratory Dinner, sponsored by Casey Family Programs.
Posted by Lisa at 5:35 AM No comments:

On Tuesday and Wednesday, youth visited 15 legislators' offices to share their two proposals.
Posted by Lisa at 5:33 AM No comments:

On Monday morning, youth participated in training, preparation and practice.

Followed by a 4 pm meeting at HUD Headquarters in Julian Castro's official meeting room that included their staff and representatives from Health and Human Services, including the head of the Children's Bureau.

1. HUD-FASH:  A foster care housing program based off an existing successful veteran housing program. The youth asked that this program be implemented and made into an Ohio demonstration project (make it happen and we will show that it can work)

2. A proposal regarding Chafee, which is existing funding to help youth aging out of care, but has been flat funded since 1999 (meanwhile, the number of youth served is increasing)
Posted by Lisa at 5:29 AM No comments: