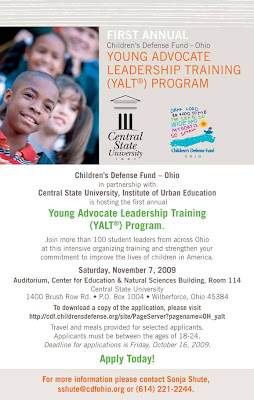 CDF-Ohio will provide meals and coordinate transportation for all successful applicants. This might be particularly helpful for youth who are over the age of 18/emancipated and actively involved in local and statewide youth advisory efforts.
Posted by Lisa at 2:12 PM No comments:

During the 2009 Ohio CASA conference, Kelly Knight, one of the founding adult supporters of the Ohio YAB was awarded the Mary Ellen Social Work Award for Excellence in Children Services.

Since January 2008, Kelly has trained over 130 new CASA/GAL volunteers, during her nights and weekends. She tells her classes, "If you don't see concurrent planning, you should be questioning the case plan and insisting on its inclusion."

During her acceptance speech, Kelly pointed out that, "Time passes differently for children."
Kelly described how, for busy professionals, postponing paperwork or continuing a case might be tempting because time seems to be moving quickly. But for the child, that time is moving painfully slowly in terms of connecting them with love and permanency.