FCAA Volunteer of the Year Award 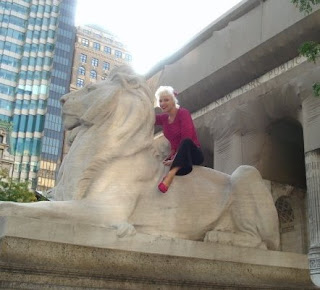 Foster Care Alumni of America honors Lisa Dickson
Aurand, Lisa. ThisWeek, May 12, 2010.
When Lisa Dickson "aged out" of foster care at 16, she had a myriad of people who became her advocates.

The list included the English teacher who wrote a "rousing" recommendation for her college acceptance, the University of Kentucky admissions counselor who marched her over to financial aid and said, "This girl needs grants," the residents of the Methodist dormitory who became her "family" when she moved in after a year of homelessness.

Now Lisa is fighting for other foster care alumni to have the same chances at success she did.

"The people who were there for me are what motivate me," Dickson said. "All the things that I do now are because of them."

Dickson was named one of four Foster Care Alumni of America Volunteers of the Year in this, the awards' first year. She was a founding member of the group, and is the communications chair for its Ohio Chapter.

She was in foster care in Kentucky from ages 12 to 16 after her mother died, and was able to start classes at the University of Kentucky at age 16.

By 17, Dickson was homeless, but still attending college. It wasn't until she was 18 that she began living in the Methodist dormitory. She tried five different majors and was in college for 10 years, finishing by earning a master's degree in library science.

Dickson, a Children's Librarian, said she spends about 40 hours a week volunteering for FCAA. The local chapter focuses on assisting the approximately 1,300 Ohio youths who age out of foster care each year.

"The top two things we do are connect and transform," she said.

The group helps foster care alumni connect with other former foster children, wherever they live.

For the past several years, the group has hosted an annual Thanksgiving dinner, an event that began when foster alumni from all over the country met in Washington, D.C., to talk to federal legislators about federal child welfare financial reform.

"We said we were coming home for the holidays," Dickson said.

The "transform" part of the group's mission involves lobbying on behalf of foster children making the transition to life on their own. Dickson was one of several foster care alumni who testified in front of the state legislature last year, asking members not to cut funding for programs that teach older foster care children how to live on their own.

Though the funding was approved by the Ohio House of Representatives and Senate, it was vetoed by Gov. Ted Strickland, Dickson said. But one good thing came out of that news: Dickson and a few of her colleagues were asked to be part of Strickland's Taskforce for Youth and Young Adults in Transition.

The two biggest needs for fosters in transition are housing and health insurance, Dickson said.

"One in four homeless adults is a former foster," she said.

Even those who end up going to college still struggle with housing and finances, she said.

"Most college kids, when they have (financial) trouble, they call mom and dad. But there is no mom and dad to call (for foster children)," Dickson said.

And though the recently passed federal health care bill will eventually mandate insurance for former fosters, that coverage won't take effect until 2014, she said.

Dickson, who recently was engaged as FCAA's volunteer social media coordinator, said she won't stop her quest to help fosters the way others helped her.

"I love the kicking-butt part and trying to make a difference," she said. "(The people who helped me) were there for me and cared for me. I want that for everyone."
Posted by Lisa at 3:17 PM No comments: 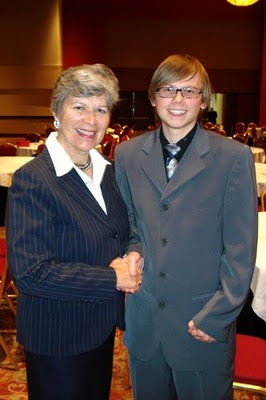 Alexander McFarland has served as President of Ohio's statewide foster care youth advocacy board (Ohio YAB) for two years. When the Ohio YAB lost its funding and supportive staff, Alex immediately began advocating for alternative funds, and succeeded in attaining a grant for 25K that will support the continued existence of not only the statewide board, but county and regional foster youth advisory boards as well. He has traveled throughout the state of Ohio to help create and develop youth advisory boards.

Alex has served as the Legislative Liaison for the Ohio chapter of Foster Care Alumni of America for two years. He participated in the 2008 Alumni , the 2009 anniversary of Chafee funding, and presented a workshop at the 2009 NILA Conference. Alex was chosen by Ohio's First Lady to represent the needs of Ohio's foster care youth on Governor Strickland's 2010 .

Alex is known throughout the state for his vision and determination. He testified before Ohio legislators to advocate for the restoration of the state Independent Living Allocation. He arranged for Ohio foster care youth, alumni and allies to visit 24 legislator’s offices in order to promote Ready to Launch, a reminder to Ohio legislators of a front-end investment in transitional youth.

Alex is committed to supporting the national foster care youth/alumni community. During the 2009 NILA conference, he arranged a meeting of representatives from the Colorado, Tennessee and Ohio chapter in order to network and share ideas. He continues to keep in touch with FCAA members in Colorado, in order to be a support to them as they build their chapter.

Finally, Alex is a strong advocate of education reform. He is an active participant in Ohio Reach, a statewide initiative to increase the number of foster care youth who enroll in and graduate from college. In 2009, he participated in the statewide Ohio Reach Summit, including serving on the panel of youth voices. Alex’s words and passion resonated with participants, which included 100 social workers and 100 higher education representatives.

Alex uses his experiences from his entire life, when he was officially in foster care and even before that, as well as all the experiences from the youth he interacts with on a daily basis, to help shape solutions for Ohio’s foster youth. Whether he is on the field in a legislator’s office, at school studying Biology, or working as a Assistant Manager for Jack’s Aquarium and Pets, Alex strives to help the Children, Foster Youth, Former Foster Youth and pets of his community.