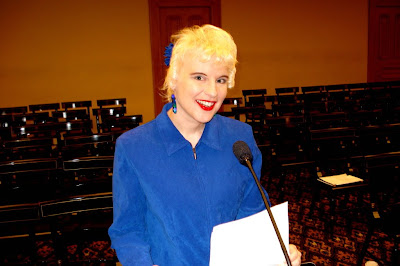 The room was crowded Saturday for a public testimony session in the Senate Finance and Financial Institutions Committee, with several dozen witnesses prepared to either praise changes made Friday to HB1 (Sykes), or to urge the chamber to restore funding to a cut program.

Acknowledging the long day ahead of them, Chairman John Carey (R-Wellston) said that he was invoking his powers as a committee chairman and allowing audience members to bring in water and coffee despite warnings against it outside the hearing room.

They were Lisa Dickson, founder and communications chair of Ohio's statewide voice for foster care alumni; Doris Edelman, Legislative Liaison for the Ohio Independent Living Association; and Alexander McFarland, President of the Overcoming Hurdles in Ohio Youth Advisory Board.

All three advocated restoring the funding to $2.5 million in each of FY10-11.

Dickson, a former foster child and youth advocate, said the program had lost its funding but that the Senate had restored $1.5 million of support. She said Ohio is the only state making cuts to such a program, which she said offers training and life services to prepare foster care children to face the world alone.

She said foster children are not a line item and rely on the state to act as a parent. Without proper intervention, Dickson said, those children are at higher risk for poverty, unemployment and incarceration. "Ohio taxpayers will pay for their needs one way or another," she said.

McFarland shared his experience as a child who spent five years in foster care. "Without these services, I would not have been the person that I am today."

Sen. Dale Miller (D-Cleveland) asked more about the funding mechanism. He was told it had been previously funded using TANF money but now is a line item in the children and family services portion of the Ohio Department of Job and Family Services' (ODJFS) budget.

- Lisa Dickson didn't say that Ohio was the "only state making cuts to such a program." She spoke about the Fostering Connections Act, and how these cuts come at a time when the needs of transitioning foster youth are being recognized on a national level...

It was and still is an earmark of the TANF budget. Both Lisa and Doris mentioned in their testimonies that Independent Living funding in Ohio should not be an earmark, and that young people transitioning out of foster care each year should not have to fight to maintain the only state source of funding allocated to prepare them for adulthood.
Posted by Lisa at 10:17 PM No comments:

Sykes steps up as legislative champion for Ohio foster youth

Representative Sykes, an Akron Democrat, stated that he will be a champion for funding of the independent living initiative in conference committee.

Also, Representative Sykes announced that he will form a Foster Care-Independent Living Study Committee to develop legislative and funding recommendations on funding for IL services for foster youth.

Rep. Sykes is a political science PhD, and he recognizes the importance of examining the state-county financing model of IL services. Restoring the Independent Living Allocation is important, but as long as it remains only an earmark, its survival will be in jeopardy in future years.

The Foster Care-Independent Living Study Committee is scheduled to launch sometime this summer.
Posted by Lisa at 11:15 AM No comments:

Supporting Student Success
View more presentations from ohioreach.
Posted by Lisa at 11:13 AM No comments:

1,300 young adults are "aging out" of the Ohio foster care system this year. They will face the adult world, in the midst of a recession, armed with only their courage, their dreams, and their endless potential.

If one person in their lives invests in them and offers guidance, without wanting anything in return, as they try to obtain the higher education that can pave the way for their future, that can make ALL the difference in terms of their future.

The goal of Ohio REACH is to establish foster care liaisons at every Ohio community college and university, in order to address recruitment and retention of emancipated foster youth in Ohio’s higher education system. 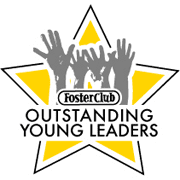 Adrian McLemore was placed in foster care at age six as a result of his mother’s substance abuse. During his time in foster care, he lost his grandmother in a car accident while driving from Georgia to come to take custody of him and his siblings. Instead of being immobilized by grief, he focused his efforts on education and providing leadership for other foster youth.

At fifteen, he was elected the youngest president of a statewide organization. Adrian attributes his success to his own determination and the support given to him by his case workers. He indicates that they were instrumental to his development by ensuring that he was able to participate in various programs and activities.

Adrian is a member of the Ohio chapter of FCAA, the OHIO Youth Advisory Board, and serves as Vice-President of the VISON Board in Dayton, Ohio. He has advocated many times at both the State and Federal Level on bills that affect foster youth. While Adrian has positioned himself to be an advocate and a leader in his community, it is unfortunate the he aged out of the system without a permanent home.

Currently, Adrian is pursuing a Bachelor of Science Degree in Business Management at Wright State University. He hopes to further his education at a graduate level, either obtaining a Masters Degree or a Law Degree. He has future aspirations for public service.

Cedric Riley is a 20-year-old college student dedicated to community leadership and success for himself and others. At the age of nine, he and his four siblings were placed in the Cuyahoga County Foster Care System due to parental neglect, and his life has been changed ever since. Though he and his siblings were placed in different homes, Cedric was able to adapt and learn the importance of independence and relationship-building. After 8 years in the foster care system, Cedric was adopted into a loving home in Cincinnati, Ohio where he experienced much of his scholastic and professional success.

Having enjoyed the honor of several leadership and academic accolades throughout his time in Cincinnati, Cedric has decided to give back by speaking passionately to youth, expressing that “Success is a Choice.” He also engages with professionals who work with youth to enforce that their work makes a difference.

Currently Cedric is developing the pilot of his curriculum and campaign entitled “America’s Next Motivator!” to bring creative empowerment to life.