What is the Foster Youth Independence Program (FYI)?
Since 2013, the FSHO Coalition, led by ACTION Ohio, has worked in partnership with the National Center for Housing and Child Welfare (NCHCW), elected officials including foster youth champions, Reps. Turner and Bass, and the U.S. Department of Housing and Urban Development (HUD) to study how to knit existing federal programs together to eliminate the gaps through which foster youth fall into homelessness.
The FSHO Coalition discovered that the best way to eliminate gaps is to synchronize existing programs such as HUD’s Family Unification Program (FUP), with the predictable nature of emancipation (the date a young person leaves state custody). FYI allows all local Public Housing Authorities to provide an “on demand” FUP voucher that is timed with a young person’s emancipation from foster care. In this way, existing federal resources, can be knitted together and used as a platform for economic success.
What is the Family Unification Program?
HUD’s Family Unification Program (FUP) is the only national housing program aimed at preventing family separation due to homelessness and easing the transition to adulthood for aging-out youth. HUD provides Housing Choice Vouchers (“Section 8”) to local public housing authorities (PHAs) who apply to administer the program. These PHAs are then required to work in partnership with the local public child welfare agency to identify youth and families to refer to the program. FUP has existed since 1990 for families and youth were added as an eligible population in 2000. Unlike families, young people participating in FUP receive vouchers that are time-limited to three years.
The impact of this relatively small program is extraordinary. Each year more than 75,000 children live in safe, affordable housing and avoid out-of-home placement and homelessness due to FUP. Since youth were added in the year 2000, more than 5,000 young people have received housing vouchers and their own, independent apartment upon leaving foster care.
How does FYI change FUP for youth?
Here is a Detailed Briefing Paper from HUD, and a link to Frequently Asked Questions.
Currently, FUP vouchers for youth come from an unpredictable pool of funding and are only administered by certain PHAs. FYI will address this challenge in two ways. It will provide a method for national consistency by allowing all PHAs to administer FUP. FYI will also make it possible to issue youth vouchers on demand, by changing the funding source to a flexible but little-known account at HUD called the Tenant Protection Account. Vouchers (TPVs) from this account can be issued “on demand” at the discretion of the HUD Secretary. To learn more about TPVs visit www. nchcw.org.
Who is eligible?
FYI does not change FUP eligibility for youth.
How does a child welfare agency make a referral?
Here is a link to some diagrams to help understand the process.
D.) How many young people will this program serve annually?
Posted by Lisa at 7:30 PM No comments: 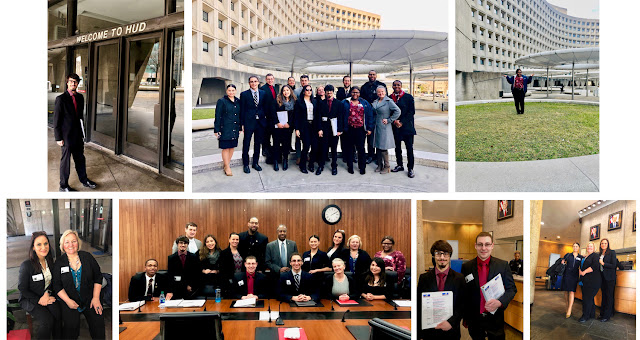 Update from John Kelly, of the Chronicle of Social Change, July 25, 2019. Earlier this year, we reported on the case made by current and former foster youths to use existing authority at the Department of Housing and Urban Development (HUD) to connect youth aging out of care with housing supports. The Chronicle of Social Change has learned that, after a thorough review of the policy by HUD’s general counsel, the agency is set this week to approve this and notify thousands of public housing authorities. HUD has yet to publicly comment on these developments. But an event is being planned for this Friday in Milwaukee, Wisconsin, during which Secretary Ben Carson will announce the Foster Youth to Independence initiative. “I truly believe that in order to improve outcomes for our youth, our people who make the decisions have to be willing and able to listen to the population they are serving,” said Jamole Callahan, one of the former foster youths who helped campaign for the policy. “This solution … was a simple fix. This is another step towards ending youth homelessness." The plan was pitched to HUD by Fostering Stable Housing Opportunities (FSHO) Coalition, whose members met in early March with HUD Secretary Ben Carson to lay out a plan for a $20 million voucher program. Under that plan, HUD would use an existing pot of money – a federal rental assistance account – to pay for the vouchers. “We see kids attempt post-secondary and fail just because they don’t have housing,” said Callahan, who helps lead Foster Action Ohio, in an April interview with The Chronicle of Social Change. “They have to work to maintain an apartment, then school becomes the background. And it becomes all about survival.” As per this plan which was crafted by Ohio foster care youth and alumni: A child welfare agency would file paperwork with HUD for what’s called a Family Unification Voucher in the months before a youth aged out. That youth would be tied into HUD’s Family Self-Sufficiency Support program as well, which means the voucher could last up to five years. After a youth’s voucher is up, it is then “recycled” back to HUD to be used for another youth. HUD, after reviewing the argument, agreed it is allowable under existing authority and is moving forward on it. The agency did not cap the voucher availability either, which means the total spending on foster youths could exceed $20 million. The need for housing supports for foster youth is critical. Anywhere from 20,000 to 25,000 youth age out of care each year in America, and 28 percent experience homelessness by age 21, according to the National Youth in Transition Database. In some states, it’s above 40 percent. In a recent study based on interviews with 215 young adults who experienced unaccompanied homelessness as youths, foster care was identified as a major factor. Ninety-four out of the 215 interviewees had a history in foster care; of that group of 94, nearly half said entrance into foster care was the “beginning of their housing instability.” Advocates for the plan are still pursuing federal legislation to codify it into law. The FSHO Act would guarantee a housing voucher starting from emancipation through age 25 for any youth aging out of foster care who could demonstrate the need for a subsidy. The bill is co-sponsored by Reps. Mike Turner (R-Ohio) and Karen Bass (D-Calif.). 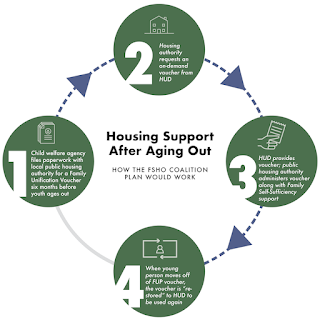 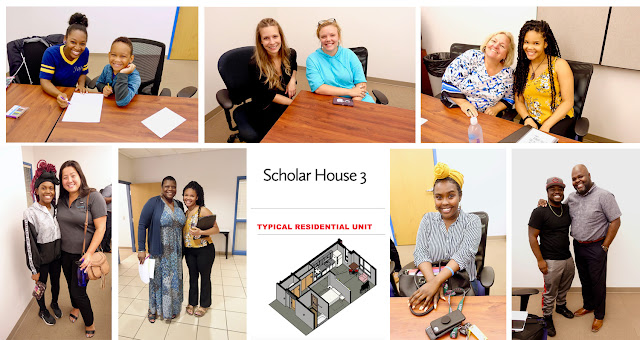 Link to more photos.
Posted by Lisa at 5:00 AM No comments: