ACTION Ohio's Letter to the Editor 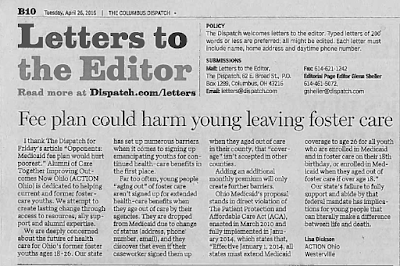 Letter to the Editor:  Fee plan could harm young leaving foster care
As published in the Columbus Dispatch on Tuesday, April 26, 2016
I thank The Dispatch for Friday’s article “Opponents: Medicaid fee plan would hurt poorest.” Alumni of Care Together Improving Outcomes Now Ohio (ACTION Ohio) is dedicated to helping current and former foster-care youths. We attempt to create lasting change through access to resources, ally support and alumni expertise.
We are deeply concerned about the future of health care for Ohio’s former foster youths ages 18-26. Our state has set up numerous barriers when it comes to signing up emancipating youths for continued health-care benefits in the first place.
Far too often, young people “aging out” of foster care aren't signed up for extended health-care benefits when they age out of care by their agencies. They are dropped from Medicaid due to change of status (address, phone number, email), and they discover that even if their caseworker signed them up when they aged out of care in their county, that "coverage" isn't accepted in other counties.
Adding an additional monthly premium will only create further barriers.
Ohio Medicaid’s proposal stands in direct violation of The Patient Protection and Affordable Care Act (ACA), enacted in March 2010 and fully implemented in January 2014, which states that, “ Effective January 1, 2014, all states must extend Medicaid coverage to age 26 for all youth who are enrolled in Medicaid and in foster care on their 18th birthday, or enrolled in Medicaid when they aged out of foster care if over age 18.”
Our state's failure to fully support and abide by that federal mandate has implications for young people that can literally make a difference between life and death.
Lisa Dickson
ACTION Ohio
Westerville
Posted by Lisa at 5:11 AM